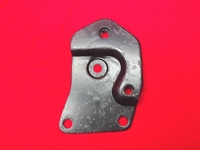 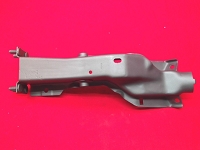 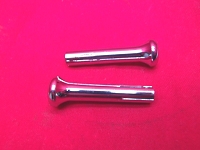 In 1969 all (assumed) General Motors cars with standard transmissions,
were fitted with a system that made you put the shifter in reverse, before
you could remove your key from the steering column. I call it a system
because it involves many changes from 1968. The changes includes the
steering column, reverse light switch, shifter linkage and neutral start
circuit.

The purpose of these changes were theft deterrent and safety. By moving
the ignition key to the steering column it was harder to hot wire, and the
steering column could be locked, keeping the wheels in place one position.
Also the ignition key couldn't be turned off and removed, without first
putting the shifter into reverse. This prevented the car from rolling away,
and your two year old from turning the car off while driving down the road.
Note:
There were no laws for seat belts or child restraint. Many times kids roamed
around the interior of the car, or sat on the shifter console.

The linkage part of the system was often disabled the first time the clutch was
replaced, during transmission work or gear shift replacement. Many muscle car
owners thought that this was a nuisance safety system, that wasn't on 1968 and
earlier models. This disabling could be anything from, just removing the lower
rod, to removing everything from the transmission to the steering column selector
arm.

In the categories section below, I am attempting to identify
the parts of this system that go from the gear selector
to the steering column on floor shift manual transmission
models. I also use this section when evaluating reproduced
parts and kits for fit, function and originality.

In the products section are parts I sell that can be
used, if you are converting from an automatic transmission
vehicle to a floor shift manual transmission, to re-install or to
refurbish this part of the system.

Back Drive Swivel Bushings
In Stock
$4.00
Add To Cart 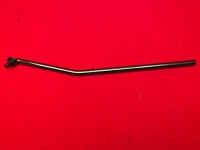 Shift Bushing and Sleeve
In Stock
$4.99
Add To Cart